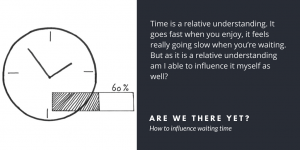 Are we there yet?

A couple of weeks ago I went with a friend of mine to the hospital. We had an appointment at two o’clock and were just a couple of minutes before at the reception of that particular section. We just sit down to start waiting when the doctor came in as it was her turn. I was waiting in the waiting room till she was finished and was looking at all kinds of surprised faces of people who walked in and sometimes didn’t even had a chance to put down their jacket as the doctor came saying it’s their turn. As the doctor said: we are running ahead of time.

Usually my experience with waiting rooms at the hospital is different. People are waiting and waiting, appointments running out of time and people feeling relieved when they hear their name meaning it’s their turn. This made me think about waiting. Why does it sometimes feel taking longer than other times? Is waiting always negative? Shouldn’t we wait more in life? Why I’m feeling more impatience in one situation compared to another? And can I train myself to get more patience?

From my perspective waiting and the feeling around it has to do everything with your own thoughts. First of all you have your own experiences, perception on and expectation of certain situations. For example: in the hospital, I know I have to wait or when I see a big row at the supermarket, I know it will take some time before it’s my turn. In other situations, I do expect almost no waiting time, for example, when I do order a book online I know it will be delivered the next day or even the same day. When one way or the other the amount of waiting time is not in line with my expectations I will be surprised. In case the book I ordered takes more than a week to be delivered I will get negative feelings and start thinking the delivery is unreliable even though all was good in the past. While when in the hospital, I don’t have to wait at all I’m surprised positively.

In other words, the question should be: how can we surprise in a positive way? One option could be to have always waiting lines and some now and then make sure extra personnel are in so on certain days there is no waiting line at all. However, I don’t think you want to be known as the company where people always have to wait. When I was calling the internet provider because of an internet outage, it took me 10 minutes before I was able to speak to a real person. In the meanwhile, I was waiting and listening to a computerized menu, but in fact I was waiting because I knew up front I had to speak to a real person as I tried everything to resolve the issue myself. In this case I have already a negative waiting experience and that one will get even worse.

If your waiting time cannot be reduced one way or the other you might think about a solution where people do pay to wait shorter. I can get my online ordered book delivered within 4 hours if I do pay additionally or I get a response on my e-mail within 1 hour instead of 24 hours if I do pay a higher member fee.

But I’m I really paying for a shorter response time or should I change my waiting behavior? I think Henry Sung did a really nice experiment when he was a student. In his Ted Talk he explained that waiting is related to anticipation and disappointment. During his experiment he just randomly was seeking for persons living in his city. He got into contact with them on Facebook and arranged a meeting, where the meeting point was at a central/famous area. Most of the time the people didn’t show up, but Sung experienced that by waiting at the end he saw all kinds of people waiting for their appointments. Instead of feeling negatively by people not showing up or showing up late, he saw it positively: he could get into contact really easily with other people waiting at the same place and could change the negative feeling into a positive one.

Time is a relative understanding. It goes fast when you enjoy, it feels really going slow when you’re waiting. But as it is a relative understanding we are able to influence it, just by changing our mindset as Sung explained. But also, by making sure that you know up front how long certain things will take as they do at Disney-world. There you know up front how long it will take before it’s your turn to get into the rollercoaster. As smart as they are, they made sure to add a certain amount of time to the notification so it will always takes shorter than expected, resulting in a positive feeling.

As a company you might want to invest time in research of customer complaints related to waiting time. What is the root cause? You can add ten more people to pick up the phone, but if everybody is same time at lunch nobody will answer that phone. You might get people really frustrated because they cannot explain their question really clearly so they are being put through ten times already. So, in that case you might want to train your team so they can answer questions more easily themselves.

And as a customer, you can accept that sometimes you just have to wait. Next time, when I’m again in the wrong line in the supermarket, I will think about this article and start enjoying that moment. Waiting is taking a short or long time, it’s up to you!