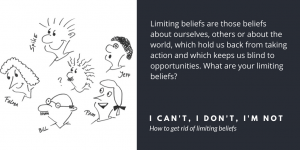 I’m just finishing the TedTalk from Graham Shaw who demonstrated that everybody can draw. This while I always thought I cannot draw. I’ve learned this is because of my limiting belief. What is a limiting belief and what can we learn from it?

Limiting beliefs are those beliefs about ourselves, others or about the world, which hold us from taking action, taking chances and which keeps us blind to opportunities. I can’t draw, so I’m not volunteering to make a cartoon or express myself via drawings. I’m not meant to be a leader. I would never become a model. I can’t start a blog as I can’t write in a motivational way. Just by believing in these kind of statements, they will limit us.

During my childhood, I was always thought that I couldn’t sing. This while I was singing in the church choir. I always told myself I was singing in the choir because we had a very big church and I could ‘sing’ very hard so at least people were hearing us. When I stopped being a member of the choir I still tell people the story of the church all the time when the asked me to sing. However, two weeks ago, I went to the museum Archeon – a Dutch historic museum – where there was a chance to sing Gregorian. I was holding back a bit as I believe I cannot sing but took the chance to join the workshop which turned out we could sing together quite well. And also, during the bachelor party of my sister we did a singing class with Karo who is convinced that everybody can sing because it is a technique you should learn.

Back to the drawing also here it is a technique you learn. And by learning this technique you’re building confidence as results are showing that you actually can draw or sing. Slowly the limited belief will disappear and you’re free to sing or draw what you want, not limited by your belief that you can’t. Slowly, as the downside of limiting beliefs is that they are so rooted in us, we’ll always focus on the evidence that reinforces that belief.

So, what does this mean in business life? It can mean that you’re holding of a promotion as you do believe you are not able to fulfill that position well. But at the same time you prove to others that you are a fit for that position. Or you’ve been told during childhood that you’re a follower so you won’t apply for a leadership position that actually suits you. In short: you do miss opportunities. Think also about your limiting beliefs about others. Is a person really a high performer or do I have a bias because the other person himself beliefs he is really good? Or can I get more out of a shy person, as I do see the skills he has, even though he doesn’t see them himself due to limiting beliefs?

So, think about your own limiting beliefs and think about if they are actually really true. It might not. I followed the TedTalk learning the technique to draw a cartoon character. I did a singing course, while I believe I can’t sing. Step over your fear and be prepared to have a go.

So back at your desk, what are your limiting beliefs? Where do you feel insecure because your belief you can’t do it? Who told you: you can’t? Do you have any proof you actually can? Is there a technique you can start to use to learn it? Just think about it. You don’t have to change all your limiting beliefs immediately, but be open for it, work on some of them and take opportunities, explore and have fun. 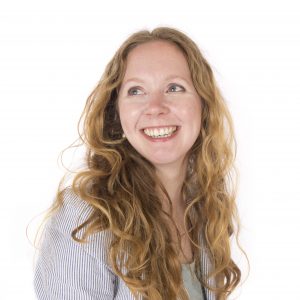