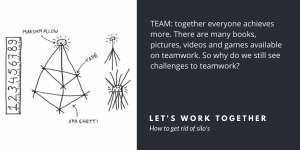 Will the song “Let’s work together” – originally a blues song written by Wilbert Harrison and recorded in 1969 – ever become outdated?

Together Everyone Achieves More

A simple search on Google gives me plenty of pictures of people rowing together, celebrating together and discussing together. Furthermore, movies, like Remember the Titans, show the transformation from bad into good teams. And did you ever participated in the marshmellow challenge? The game where you have to build with your team the highest tower of dry spaghetti, one yard of tape and a marshmallow?

Most of the animals have to work together in order to find food, avoid being attacked, basically to stay alive. We might need to go back to the phase that human people are not built to be alone as well. Maybe we are able to stay alive without working together. However, if you send people to an uninhabited island they probably have to work together in order to survive. Persons become responsible for finding food. Others need to build a home, have to cook, or protect the group. And others are tasked with the job to find ways back to the real world.

I’m not saying everybody has to send their team to an uninhabited island. Maybe taking a look at some animals might be a good start of a discussion on teamwork. On the uptempo version of Canned Heat of Let’s Work Together I’ve participated in the Video Challenge at Nyenrode. Watch here the video, share, discuss and let’s work together.